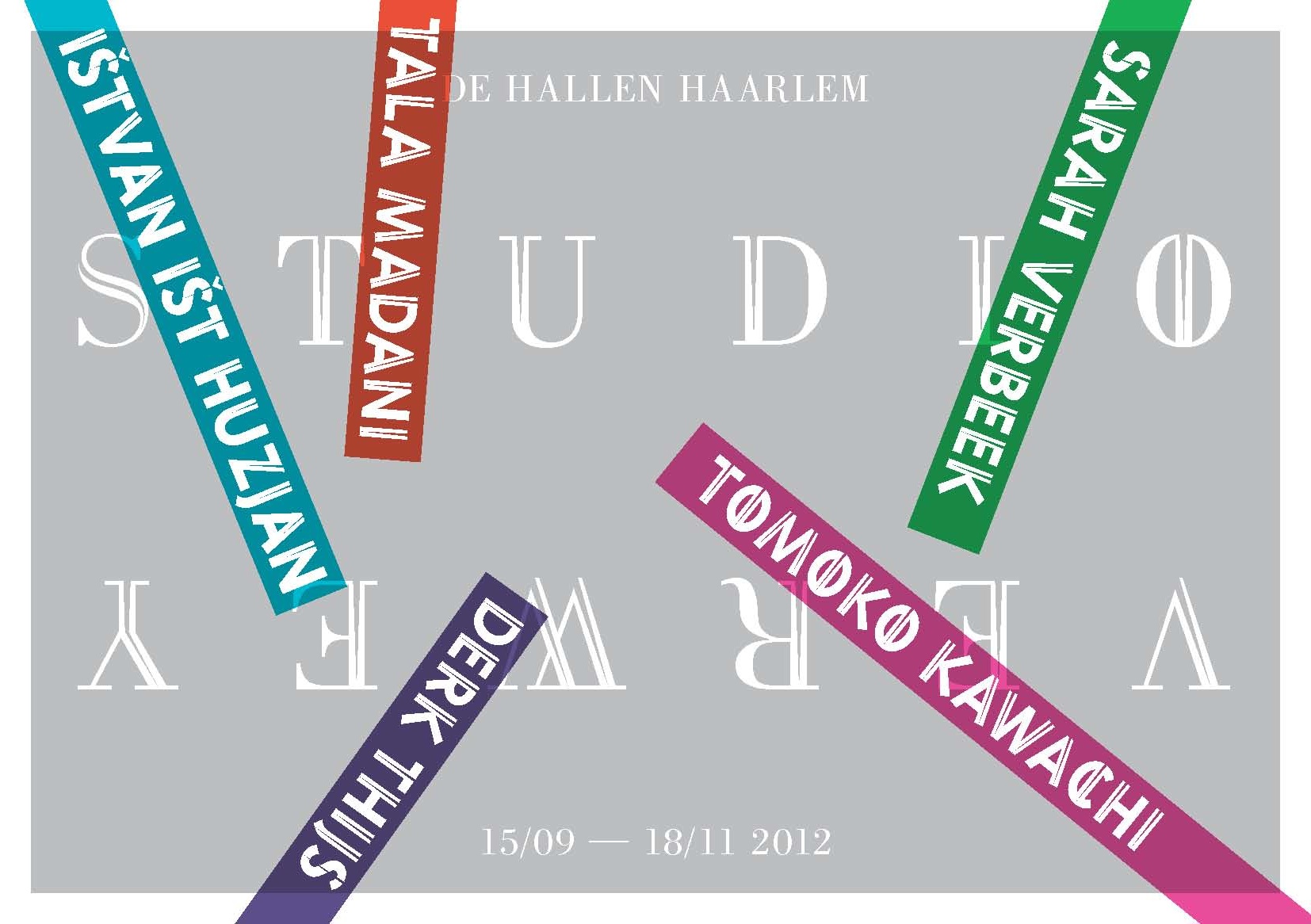 On behalf of the Kees Verwey Foundation we invite you to the preview of Studio Verwey at museum for contemporary art De Hallen Haarlem. This group exhibition includes (new) works by Ištvan Išt Huzjan, Tomoko Kawachi, Tala Madani, Derk Thijs and Sarah Verbeek. The unconventional exhibition design is by Office Jarrik Ouburg.

The preview takes place on Friday 14 September from 17:00 hrs. Please find an invitation attached. As curators of the show we hope to welcome you this Friday. You can read more about the (making of the) exhibition on our blog or visit the website of De Hallen. 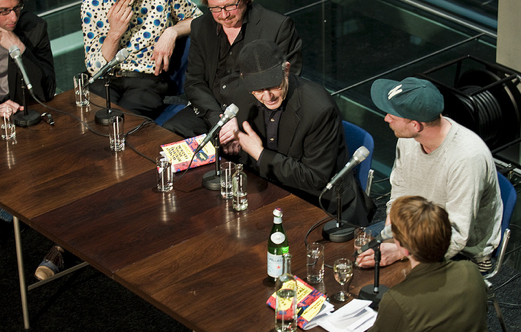 On day 3 of the World Minimal Music Festival we have our own personal selection of artists, musicians, selectors and distributors sharing their interpretations of minimal music. Between 6 and 7 pm, artist Gabriel Lester, curator Annick Kleizen and Internet savant Nalden will play 20 minutes of what is minimal in music from their iTunes.

After this, tape experimentalist Wouter van Veldhoven will do a live performance, followed by a site-specific dance performance of work of Liat Waysbort on the music of Phill Niblock. At 8.15 pm, famed Belgian contemporary music ensemble Champ D’Action will play a.o. The Sinking of the Titanic by Gavin Bryars in the main hall.

Then, from 10 pm onwards, our programme continues in the festival café, with special DJ sets by Hans Aarsman, Darco Cezveciyan and Non-fiction’s Juha van ‘t Zelfde. And there will be abstract live performances by Raphael Vanoli, Gareth Davis and Aardvarck. Join us on Facebook, and follow the live blog and audio streams over here. The complete festival café programme is free to visit all night. The Muziekgebouw during the vibrant opening (photo: Maarten Jüngen)

It has been quite a while since we took the time to write a post about the projects we are working on. This is the start of a new rhythm on the site, inspired by the incredible people of Berg in London, who consequently update their loyal followers about their whereabouts. Not sure if we have loyal followers, but at least we have a lof of things happening, and I am enjoying a cup of tea, so why not give it a try. Here we go.

We had quite a crazy weekend to start with. Michiel hosted the Future Of Classical Music marathon in The Hague on Friday and Saturday. Here he invited numerous interesting musicians, journalists and artistic directors, to discuss the future of their profession; premiered our first documentary, on Rem Koolhaas, Casa da Musica and the relationship between architecture and music; and interviewed Ellen van Loon, partner of Rem Koolhaas at the Office for Metropolitan Architecture.

My weekend was’t a quiet one either. First, on Friday, the Glasgow edition of Viral Radio. Some of my favourite musicians came to Amsterdam for this musical city exhibition. In the ever-changing world of electronic music, cities have always had strong identities. From the Vienna school of Schönberg, Webern and Berg, to the Detroit movement of Underground Resistance, Carl Craig and Derric May. The idea to organise events around cities was inspired by our hero Willem Sandberg, who created exhibitions at the Stedelijk in this way. Simple and clear. Glasgow is one of those cities that is currently carving out its own space in sound, with such stellar talents as Hudson Mohawke,Rustie and American Men. For this evening, Warp-prodigy Rustie was joined by Irishman Mike Slott (he lived in Glasgow with the LuckyMe family and helped define this scene) and the now fairly but soon to be no longer unkown producer Loops Haunt. It was a lovely night full of scifi wooshes and brain-tingling bleeps, although one would wish more people could have enjoyed it – the competition with the 5 Days Off Festival proved to be too stiff for a sold out event.

On Saturday I teamed up with Michiel in The Hague for the second part of the marathon at the Haagse Muziek Driedaagse. I particularly enjoyed the contribution of our young friend Shane Burmania, who as a student of music programming, employee of the Muziekgebouw aan ‘t IJ and kaleidoscopic music listener, aired a buoyancy and optimism about the next steps of the concert halls. His idea of Concert Night, where venues would collaborate with each other and programmes would change places, was welcomed by the director of the Dr. Anton Philipszaal Saskia Kriekhaus. Museumnacht director Radna Rumping added that the sector should try to open up its language and references more, if it wants to engage with a broader audience that might not be in the know of the linear history of classical music. I agree with her emphatically: we can introduce so many new listeners to the concert halls via smart and personal connections. The Jonny Greenwood (of Radiohead) and London Sinfonietta collaboration is still a great example of this approach (it got me hooked on Ligeti for one), and the underlying principle of a social network as Last FM another. (Thanks Florian for helping out with the festival!)

After the Hague, I rushed to Zwolle for another Viral Radio event with Rustie, Loops Haunt and my musical partner Yuri. I really love playing outside of Amsterdam. Don’t get me wrong, Amsterdam is lovely. But the thing about doing these kind of shows outside of the Randstad is the contagious energy of an audience that hears a certain music for the first time. This has happened in Nijmegen with Nosaj Thing and the Gaslamp Killer, with just Yuri and myself in Eindhoven, and now again with this group of musicians in Zwolle. A great night, organised by a sweet group of people connected to the Fakkelbrigade scene.

My tea has gone now, but I still have to tell you about North Sea Jazz, The Great Dictators, Leve de Leegstand, Museum Manager 2011, and some thoughts on e-culture, social networking, ecosystems and value chains of arts, urbanode, Visible Cities, and our new t-shirts. This new rhythm is getting out of control, sorry about that. If you managed to read to here you are in need of some rest, and a stiff gin and tonic. So I will continue when you are either rested, or drunk.

Have a good weekend. 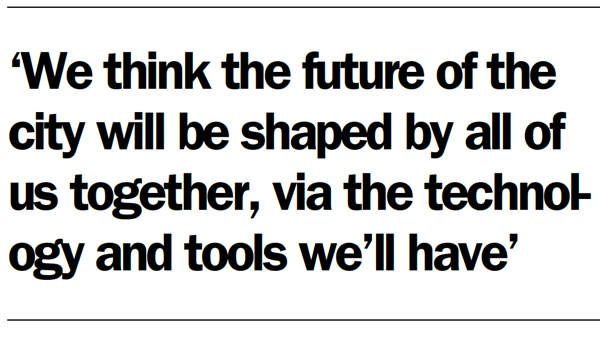 END_OF_DOCUMENT_TOKEN_TO_BE_REPLACED

The city is everybody 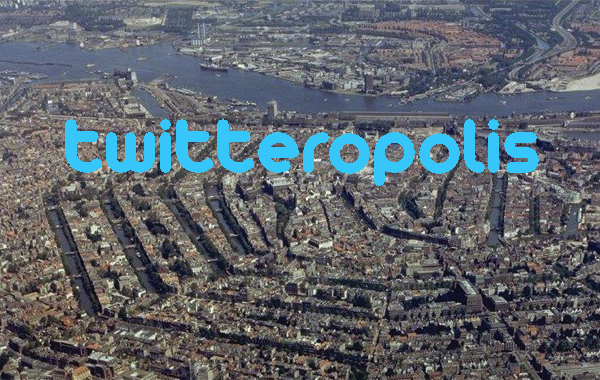 We are in the last day of our Time Out Amsterdam Future City tweet aggregation, and have been enthused by the imaginative, witty and sometimes harsh messages from the future. Artist Aaron Koblin hopped off the 5 minute electro-magnet train from Utrecht, transcontinental VURB founder Ben Cerveny printed 30 bikes and discovered that the floating polder Almere III had been altered by the residents (again), and ubicompuman Adam Greenfield is upset he needs to pay 100k to get into Europe.

The answers to our question “What are you doing in Amsterdam in 2020?” are coming from all sides of the planet, from Winy Maas and Friedrich Von Borries to Radna Rumping and Nalden. You are still welcome to join us in building our collaborative Twitteropolis. But hurry, our deadline is Monday morning. So according to you, what is happening in Amsterdam in 2020?