Swiss apps, a workshop on the future of art radio part 1 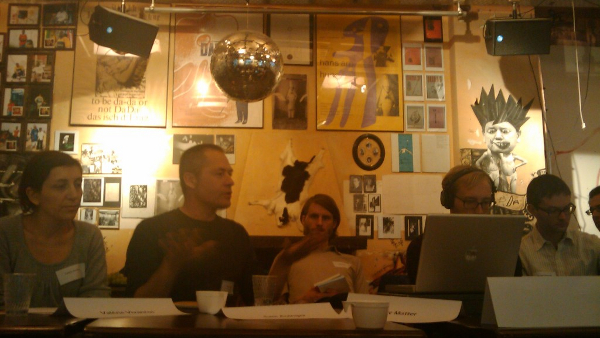 Audio Art on the Radio, a workshop in Cabaret Voltaire in Zurich

As the web becomes more social and mobile, recommendation engines and sharing platforms are becoming preferred destinations for people who follow current developments in music. Some radio professionals worry about this development, thinking their historical role as ‘expert’ selector and caretaker will diminish. Others state that the quality of the digital broadcast will be less than the analogue waves. And what about the hiss and noises on FM and AM we are so accustomed too? Is digital radio still the same kind of radio as we have known it since the first developments in the late 19th century? What are the conceptual and aesthetic implications of radio becoming digital?

These questions were raised at an intimate workshop in Cabaret Voltaire in Zurich last week. ‘Audio Art on the Radio: debating the future of radiophonic practices’ was organised by the Institute for Contemporary Arts Research of the Zurich University of the Arts. Invited were academics, curators, artists, radio presenters and others involved in radio, art and music. Amongst them Angus Carlyle of CRiSAP, Elisabeth Zimmermann of Kunstradio ORF, Richard Thomas of Resonance FM, Dinah Bird of the Musée d’Art Moderne de Paris, artist, curator and scholar Sam Auinger. The workshop was chaired by artist Michael Hiltbrunner and artist and write Salomé Voegelin. I was kindly invited to present the case of Soundmuseum, an online museum for sound art that was founded in 2008 in Amsterdam of which I am one the editors.

The workshop addressed quite a lot of questions, and the most important ones I will try to walk through here. This is part 1 of that (chaotic) attempt, and I hope to write the rest soon. One thing is clear: this day was a good warm up for a series of critical perspectives on the future of public and independent radio.

How open, interactive and democratic should radio be?

Before answering this, try imagining how we would invent radio now if it had not existed. A definition of radio could be handy too, since the discussion in Zurich was flawed by different takes on this. The students of Sam Auinger don’t really care about radio as a historical form, they care about the content broadcasted. Radio is just one channel in the mediasphere. They care about artistic, cultural or political archaeology, the pleasure of finding things out and discovering historical footage by delving through the archives of a network. Maybe listening behaviour is becoming less immediate and reactive – i.e. live and ephemere – but more delayed and proactive – i.e. on demand and ubiquitous. Each content finds its own way through the network (the message is the medium?) My overall feeling of the morning session is that a lot of time was wasted with the discussion on analog versus digital, FM versus the web. The web is here for you to use, to paraphrase urban strategist Adam Greenfield.

How is art radio funded currently and how do you develop strategies for its financial support in the future, particularly in relation to the Internet and digital radio?

There was an interesting difference between Kunstradio ORF (national public radio), Resonance FM (local independent radio), and Soundmuseum (an online archive). Where Kunstradio has  high quality studios and engineers, it has diminishing budgets and control over its distribution and marketing. Broadcasting radio art and plays is a costly endeavour in Austria, that happens mainly through FM. And eventhough it champions the fact it has been online since 1995, almost before the web existed, it has an outdated website to current standards.

Resonance FM, London’s first radio art station that provides “a radical alternative to the universal formulae of mainstream broadcasting”, has the problem of increasing broadcasting fees when the FM will be shut down in a few years (I believe 2012, but I am not certain) and they have to transfer to DAB, a digital format for broadcasting radio. Funding comes from the Arts Council, and contributors from local (art) communities. Their interest is local but their scope is international. They encourage presenters to host in their native language, which results in that one show that is presented in Farsi has listener’s community in Iran. Richard Thomas, News Editor and Content Manager of Resonance FM, spoke passionately about the threats the web hold for analogue radio, and was slightly nostalgic for the indeterminate and random nature of traditional radio. Not knowing what to expect, being in the moment, and having an intimate presenter-listener relationship were qualities that would disappear with the web, according to Thomas.

Soundmuseum, an Amsterdam founded museum for sound art, does not make radio. Instead, it curates online exhibitions of artists working with sound. From its inception in September 2008, it has organised 12 exhibitions, and there are now 180 works in its growing online collection. The museum has an installation that travels as a physical conduit to the collection. Soundmuseum has received support from various Dutch funding vehicles, as Mondriaan Foundation and Amsterdam Art Fund. The collection is permanently available to anyone with an internet connection. In the future an academy should be developed that opens up the museum to art students and others with an interest in sound. A mobile application is another plan, which could contextualise the collection within a local infrastructure (think of Soundmuseum Paris or Zürich, with works for public space or transport). Embedding it within social structures like Facebook, Twitter and Soundcloud are already considered, but need to be improved to make it really accessible and ubiquitous. Last but not least, and this was an answer to Sam Auinger’s question, the museum will think more about how to embed the contemporary archive and developing discourse into the existing art historical context. A wiki could be useful, and convergence with available databases and other sources like Ubu and Archive.org.

Speaking from the Amsterdam perspective, my answer to how to maintain eligible for funding was fourfold:

1. Provide interesting content
The value chain begins with the quality of what you offer. At the end of the day, garbage in seems to be garbage out.

3. Collaborate
Collaborate and shape networks, both on and offline. Pool your curatorial, financial and promotional resources with relevant partners and stakeholders.

These points are of course not some magic formula, but could function as a starting point for a much needed discussion on the future of (art) radio.

Those present enjoyed the thought of starting a collaborative European engine, and a follow up workshop would be a sound idea.