It has been quite a while since we took the time to write a post about the projects we are working on. This is the start of a new rhythm on the site, inspired by the incredible people of Berg in London, who consequently update their loyal followers about their whereabouts. Not sure if we have loyal followers, but at least we have a lof of things happening, and I am enjoying a cup of tea, so why not give it a try. Here we go.

We had quite a crazy weekend to start with. Michiel hosted the Future Of Classical Music marathon in The Hague on Friday and Saturday. Here he invited numerous interesting musicians, journalists and artistic directors, to discuss the future of their profession; premiered our first documentary, on Rem Koolhaas, Casa da Musica and the relationship between architecture and music; and interviewed Ellen van Loon, partner of Rem Koolhaas at the Office for Metropolitan Architecture.

My weekend was’t a quiet one either. First, on Friday, the Glasgow edition of Viral Radio. Some of my favourite musicians came to Amsterdam for this musical city exhibition. In the ever-changing world of electronic music, cities have always had strong identities. From the Vienna school of Schönberg, Webern and Berg, to the Detroit movement of Underground Resistance, Carl Craig and Derric May. The idea to organise events around cities was inspired by our hero Willem Sandberg, who created exhibitions at the Stedelijk in this way. Simple and clear. Glasgow is one of those cities that is currently carving out its own space in sound, with such stellar talents as Hudson Mohawke,Rustie and American Men. For this evening, Warp-prodigy Rustie was joined by Irishman Mike Slott (he lived in Glasgow with the LuckyMe family and helped define this scene) and the now fairly but soon to be no longer unkown producer Loops Haunt. It was a lovely night full of scifi wooshes and brain-tingling bleeps, although one would wish more people could have enjoyed it – the competition with the 5 Days Off Festival proved to be too stiff for a sold out event.

On Saturday I teamed up with Michiel in The Hague for the second part of the marathon at the Haagse Muziek Driedaagse. I particularly enjoyed the contribution of our young friend Shane Burmania, who as a student of music programming, employee of the Muziekgebouw aan ‘t IJ and kaleidoscopic music listener, aired a buoyancy and optimism about the next steps of the concert halls. His idea of Concert Night, where venues would collaborate with each other and programmes would change places, was welcomed by the director of the Dr. Anton Philipszaal Saskia Kriekhaus. Museumnacht director Radna Rumping added that the sector should try to open up its language and references more, if it wants to engage with a broader audience that might not be in the know of the linear history of classical music. I agree with her emphatically: we can introduce so many new listeners to the concert halls via smart and personal connections. The Jonny Greenwood (of Radiohead) and London Sinfonietta collaboration is still a great example of this approach (it got me hooked on Ligeti for one), and the underlying principle of a social network as Last FM another. (Thanks Florian for helping out with the festival!)

After the Hague, I rushed to Zwolle for another Viral Radio event with Rustie, Loops Haunt and my musical partner Yuri. I really love playing outside of Amsterdam. Don’t get me wrong, Amsterdam is lovely. But the thing about doing these kind of shows outside of the Randstad is the contagious energy of an audience that hears a certain music for the first time. This has happened in Nijmegen with Nosaj Thing and the Gaslamp Killer, with just Yuri and myself in Eindhoven, and now again with this group of musicians in Zwolle. A great night, organised by a sweet group of people connected to the Fakkelbrigade scene.

My tea has gone now, but I still have to tell you about North Sea Jazz, The Great Dictators, Leve de Leegstand, Museum Manager 2011, and some thoughts on e-culture, social networking, ecosystems and value chains of arts, urbanode, Visible Cities, and our new t-shirts. This new rhythm is getting out of control, sorry about that. If you managed to read to here you are in need of some rest, and a stiff gin and tonic. So I will continue when you are either rested, or drunk.

Have a good weekend.

Is there still a future for classical music?

From this year on the annual Three-Day Music Festival in the Dutch city of The Hague will become the epicenter for innovations in classical music: “Is there a future for classical music?“, “How can we engage a new and young(er) audience?” and “what will a concert (hall) be like in the year 2030?“. Non-fiction sets out to broaden the horizon and discover new territories. 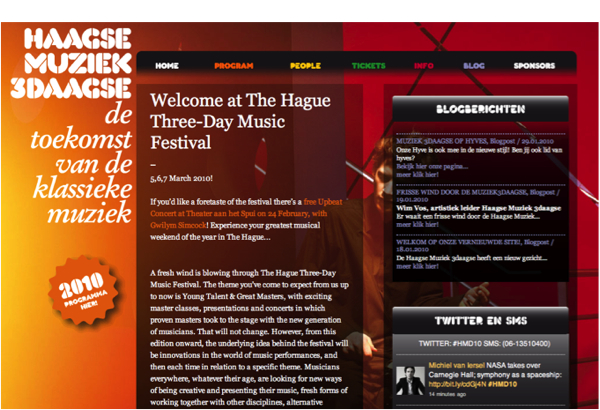 For quite some time now Non-fiction’s Michiel van Iersel has been involved in the so-called Three-Day Music Festival in The Hague. This year’s event takes place on March 5 – 7 and is the 7th edition of this annual celebration of classical music. Up to now the overarching theme of this classical music event was ‘Young Talents meet Great Masters’, with master classes, the Classic Express (an amazing mobile concert hall), recitals and concerts in which well established musicians took to the stage with a new generation of musicians.

However, from this edition onward, the festival will focus on innovations in the world of (classical) music performances. The festival wants to play a pivotal role in stimulating cross-disciplinary projects, state-of-the-art facilities, technological innovations, off-site concerts and smart (online) communication tools. The underlying questions are: “how can we engage a new and young(er) audience in classical music” and “what will a concert (hall) be like in the year 2030“?

We will be looking at the most innovative and outlandish attempts to shake of classical music’s boring image and to revitalize this ancient art form. Obviously, we will start by examining the revolutionary nature of the (classical) music itself. What would be the contemporary equivalent of Igor Stravinsky‘s controversial and violent ‘Sacre‘, John Cage‘s legendary 4’33″ or Karlheinz Stockhausen‘s mindblowing (and deafening) ‘Helicopter String Quartet‘?

On our personal shortlist you’ll find Michel van der Aa‘s chamber opera One and sound art by people like Carsten Nicolai and Christian Marclay, but also Radiohead guitarist Jonny Greenwood‘s new compositions for the London Sinfonietta as part of the South Bank Centre’s cutting-edge Ether Festival in 2005. Please let us know what your nominees are.

The impact of new and digital media on the creation and consumption of classical music will be discussed as well, from Edgard Varèse‘s groundbreaking work up to the electric violin and other absurdities from the 70′s and 80′s, via the 3D Tour of Classical Music History that was developed back in 1993 (!), down to recent innovations like the crowdsourced Youtube Symphony Orchestra at Carnegie Hall and Virtual Maestro, a game on Nintendo’s Wii which allows you to conduct a virtual orchestra.

The concert hall of the 21st century is one of the subjects that will be discussed during a new series of talk shows and presentations in which both experts and visitors will be explicitly asked to pass an opinion on future developments. We will scan the globe in search for brave architectural statements that have fundamentally changed the acoustic and esthetic standards for concert halls and music centers alike. Think of the Curtis R. Priem Experimental Media & Performing Arts Center (0r simply EMPAC) in upstate New York, Zaha Hadid‘s billowing Bach pavilion in Manchester, the new Oslo Opera House (in Norwegian: Operahuset) and our beloved Muziekgebouw aan ‘t IJ, Amsterdam’s (self-proclaimed) “Concert hall of the 21st Century”.

Architect and provocateur extraordinaire Rem Koolhaas will be our keynote speaker on Saturday, March 6. The Lucent Danstheater (completed in 1987 and housing the Netherlands Dance Theater) is one of the festival locations, but also happens to be one of Rem Koolhaas’s first completed projects to receive widespread critical acclaim. In the coming years it will be replaced by a new and multifunctional music center in the same location. Obviously we have asked him to elaborate on ‘his’ Casa da Música, being not only his most recent attempt to design the perfect concert venue but also providing a model for other music venues and cultural icons in the 21st century and millennia to come.

We will liven up his contribution with a series of short videos of users and visitors of both the Casa da Musica and the Muziekgebouw aan ‘t IJ. We want to know how the buildings function (technically, but also socially), what the biggest strengths and weaknesses of the design are, whether or not they have had an impact on the local music scene and/or international reputation and what lessons can be learned from them?

For this reason we will attend the Portugese premiere of Michel van der Aa‘s music theatre work ‘The Book of Disquiet” at Casa da Musica in Porto next week, for a recorded ‘walkthrough’ with our favorite Dutch composer and António Jorge Pacheco, the institute’s artistic director. We will be discussing the building’s design concept and day-to-day functioning from an artistic, social and practical viewpoint.

The final result of these filmed interviews ‘on the move‘ will be shown during the festival, but in the meantime we will keep  you updated on our website and on the festival’s blog and through Twitter. 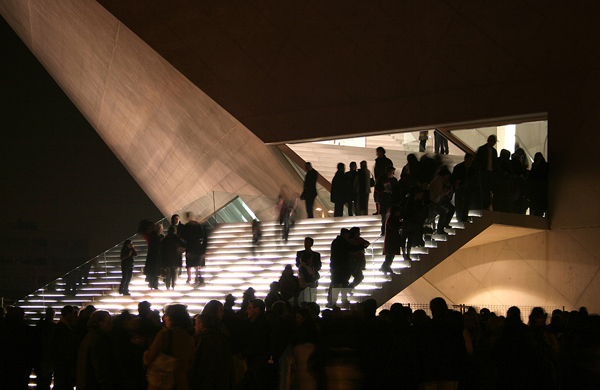