In November 2014, the second edition of Amsterdam’s annual week-long urban festival took place: the Week van de Stad (Week of the City). Non-fiction was responsible for the conceptualisation, programming and organisation of the Week. The aim of the week is to celebrate and explore a relevant urban development or phenomenon and make it accessible to a wide audience. During this edition, the most dynamic part of Amsterdam was chosen as the Week’s theme: the A10 ring road.

While the inner city only gets busier and more expensive, the ringzone still allows for experiment and leaves room for various interpretations. The 32 kilometre-long ring road was pointed out as 64 kilometres of fruitful urban space for initiatives and developments that have a hard time setting up shop or taking place elsewhere. Moreover, we recognised the ring zone as a new urban frontier. While the brownfields (such as the NDSM-shipyards) have mostly been commodified and scaled up, the greyfields (vacant apartment and office blocks, many of them along the Ring) are the next parts of the city that are to be (re)discovered and (re)valued.

Performance ‘Alpen’ by Manolis Tsipos and Tycho Hupperets during the opening event of the Week van de Stad in front of WOW Amsterdam, right next to the ring A10. (photo: Erwin van Amstel)

The diverse programme of the Week of the City gave us and the audience the opportunity to look at the infrastructure, the zone, the phenomenon, the habitat that the Ring is from several perspectives. The topics and activities ranged from the planning aspects laid out by senior planners and a conference on the road exploring the issues at stake with experts and practitioners, to a future time traveller researching the existence of ring roads in 2014 and guided tours into houses situated at the ring or walks following Amsterdam’s orbital. The tours, talks, walks, art projects, visits, research and reflection constituted a 360 view on the ring road, going beyond talking about the latest cool spots that settle along the ring, but also signalling pressing social and economic issues, and providing more poetic and mind-expanding views on what is – by many – considered a rigid urban structure or even a barrier that defines whether a district is on the ‘good’ or ‘bad’ side. 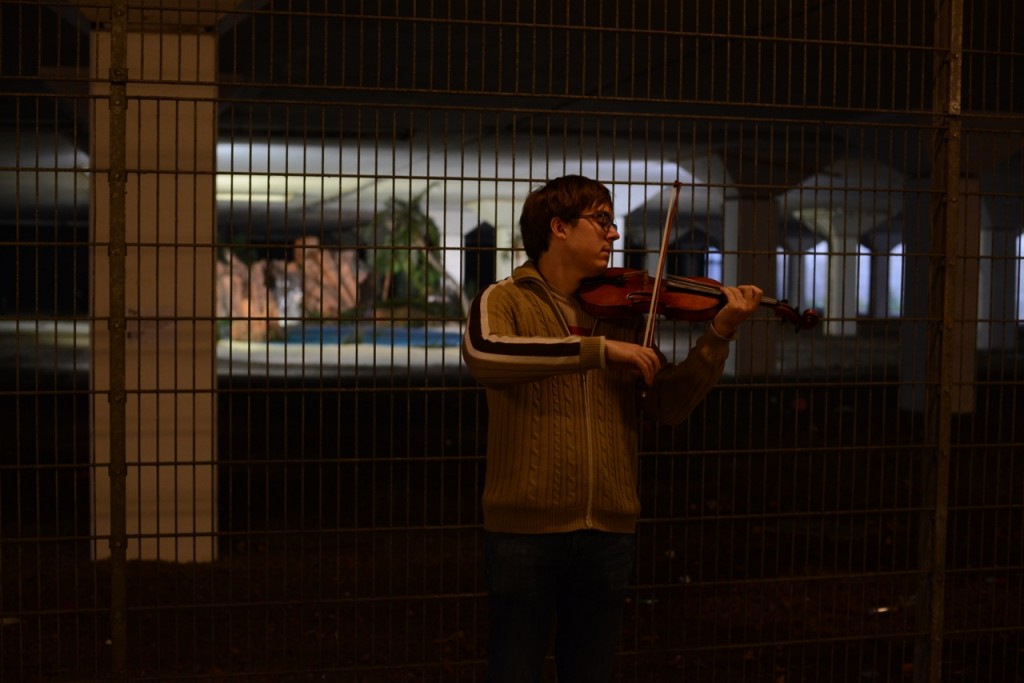 We asked a violinist to play underneath one of the A10 underpasses. This large underpass (Wiltzanghlaan) also features the artwork Under Heaven 2 by Leonard van Munster. (photo: Erwin van Amstel)

Taking place at a diverse set of locations along the ring road, including WOW Amsterdam, Old School, Ramada Apollo Hotel and Van Eesterenmuseum, the Week van de Stad engaged with different audiences through a variety activities and events. 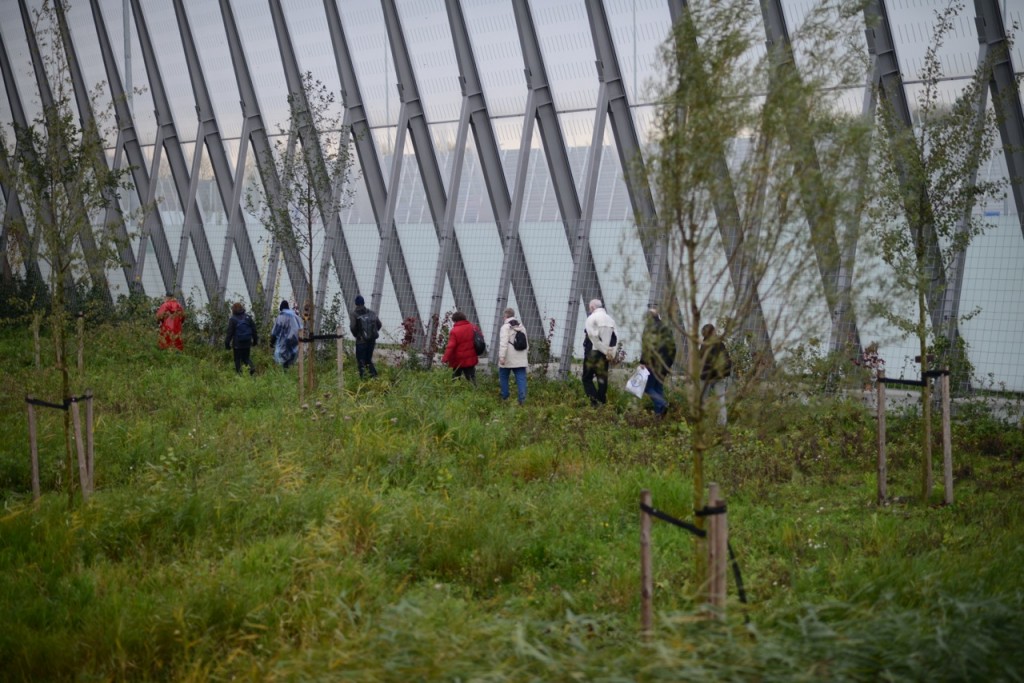 One of the ring walks, along the eastern part of the A10. In four days, the western, northern, eastern and southern parts could be explored in guided tours. (photo: Erwin van Amstel)

The Week van de Stad is a cooperation between and initiative of Non-fiction and Stad-Forum, a department of the Spatial Planning Department of the City of Amsterdam tasked with engaging the public with the workings of the city.

Non-fiction conceived of, programmed, organised and produced the Week van de Stad in its entirety: developing the concept, determining the theme, curating the content, soliciting partners, organising logistics, designing the campaign and communication, moderating events, installing an exhibition and engaging with citizens, policy makers, professionals and enthusiasts about what shapes Amsterdam.

To back our core team, we assembled a three person editorial board, who helped develop the programme and wrote background stories for the Week van de Stad website. The editorial board consisted of Tijs van den Boomen (writer and journalist specialised in public space), Victorien Koningsberger (architectural historian, specialised in mid-century modernism) and René Boer (urban researcher with an international perspective, specialised in urban social movements). 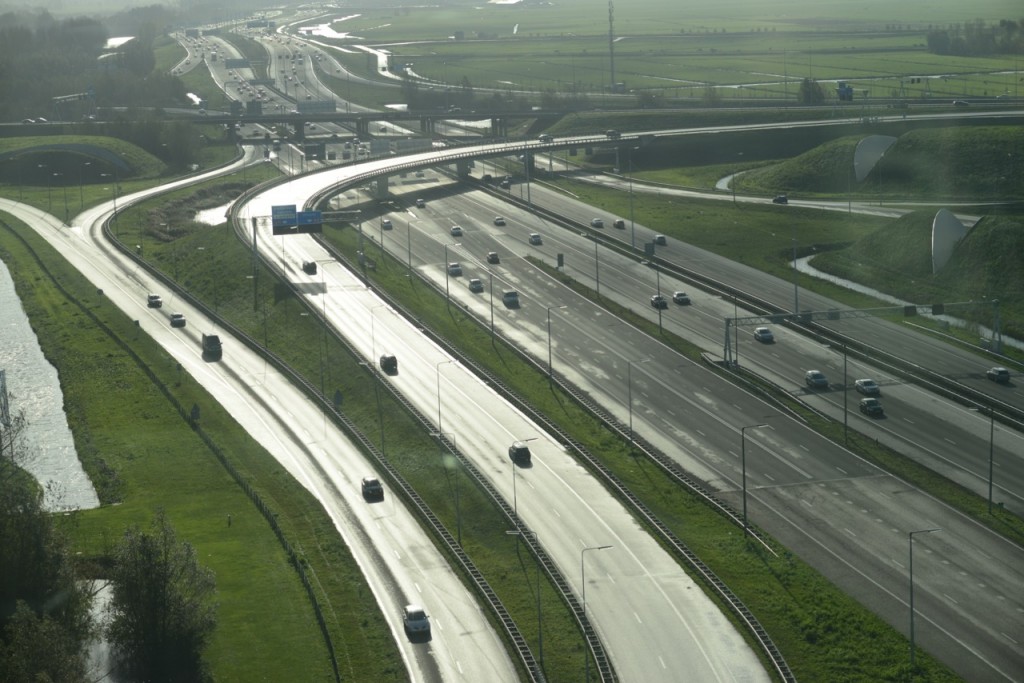 View from Fletcher Hotel, which was the vantage point during the Ring Safaris, which travelled across Amsterdam’s historical rings: Singel, Singelgracht, A10 and the connecting highways A9, A2, A1, A10 and A5, which form a potential new ring road for the city. For the Week van de Stad, this new ring was dubbed A11. (photo: Erwin van Amstel)

More information about the Week van de Stad can be found on its website.