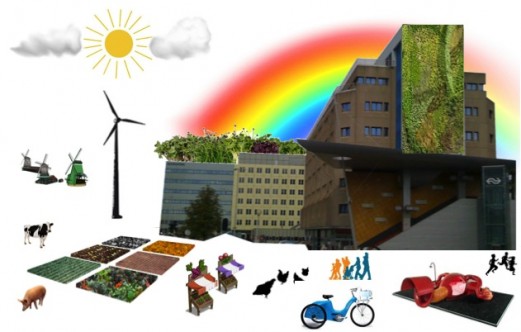 We are currently developing a plan for the temporary use of two vacant office blocks from the 70′s/80′s in Zaandam, a city of 100.000 inhabitants adjacent to Amsterdam. The buildings are located directly next to the train station and are part of Inverdan. This newly built city center boasts a plethora of remarkable buildings, including the new city hall (consisting of supersized versions of the wooden houses that are typical of the region) and the Inntel Hotel Zaandam (a pile of lifesize copies of the same wooden houses).

We focus our attention on two buildings that are situated across the train station from city hall in a business district that quite clearly is struggling to compete with the enormous urban transformation and additional office space on the other side of the station. The two buildings stand next to each other and cover approximately 15.000 m2 in total. Apart from their central location there is nothing remarkable about the structures.

Commissioned by Meurkens&Meurkens, an agency specialized in temporary use of vacant buildings, we are now developing a re-activation strategy for a 3-year period. Based on our experiences with the cultural planning and programming of a.o. De Verdieping, the creative platform in the abandoned printing plant of newspaper Trouw, we are looking at a combination of cultural and commercial functions and events and more permanent functions. Our goal is to provide space to young entrepreneurs, start-ups and NGO’s and to re-energize and re-position the buildings and their surroundings.

Our first analysis and conversations with (local) experts point in the direction of food production and affiliated industries, like package design and logistics, combined with students, artists and other creative professionals. Zaandam was the cradle of the industrial revolution in The Netherlands and is home to some of the biggest food producers and retailers, like Verkade and Ahold (known for the Albert Heijn supermarkets). The city coined the title ‘First in Food‘ and has been investing a great deal in food-related industries. We want to add a new dimension to these efforts.

This fall we will present our concept to the municipality, the owner of the buildings.