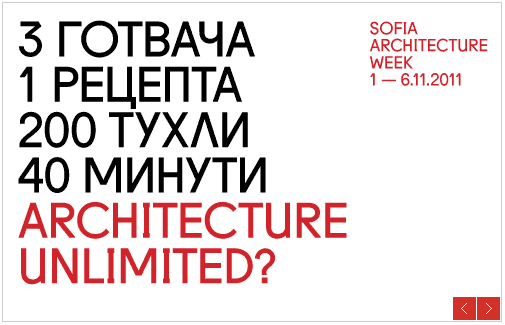 We have been invited by Ljubo Georgiev, co-curator of the Sofia Architecture Week 2011, to contribute to this year’s edition. It will take place between the 1st and the 6th of November and runs under the theme Architecture Unlimited?. SAW11 will deal with the extent, in which architecture can (still) function as a transformative tool for the urban environment in an age in which utopian ideals are replaced by city marketing, and making improvements in the cityscape is often subordinated to making profit.

We will be participating in two events:

This is the second debate in the Architecture and Politics series. We bring together architects-activists-philosophers-visionaries of urban development from Israel, the Netherlands, Romania and Bulgaria, and ask them: Can architecture change the world? How do we ensure more civic participation in urban planning and organization? What are the actual “fights” for urban space today? And what are the architects’ tactics and strategies to change the societies they live in?

In Sofia the Failed Architecture-debate is the closing event for the ‘Past Continuous-exhibition‘, showing a mix of forgotten buildings, monuments and graphic design from the communist era. But why do the overlooked and underrated spaces and places on the photos deserve our attention? And what strategies and practical tools can be used to save and re-activate them? 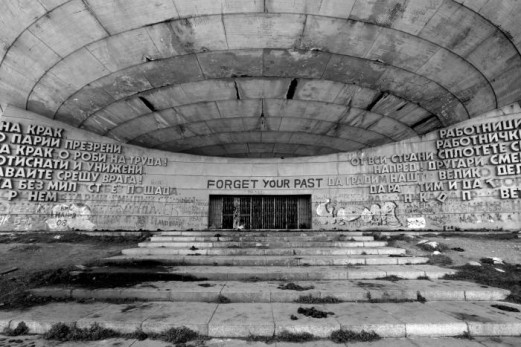 Sofia Architecture Week is an international architecture festival. It is a platform for dialogue and exchange of ideas between people who are actively engaged with the problems of urban environment. The festival aims to build up a critical mass of possible scenarios which could generate good architectural and social practices.

Sofia Architecture Week stimulates a new type of thinking, perception of and reaction towards the subject of architecture, its power and impact on society. Launched in September 2008 as a two-day conference, the event expanded into a week-long festival open to the general public and featuring a diverse and intense program of exhibitions, discussions, presentations and screenings.