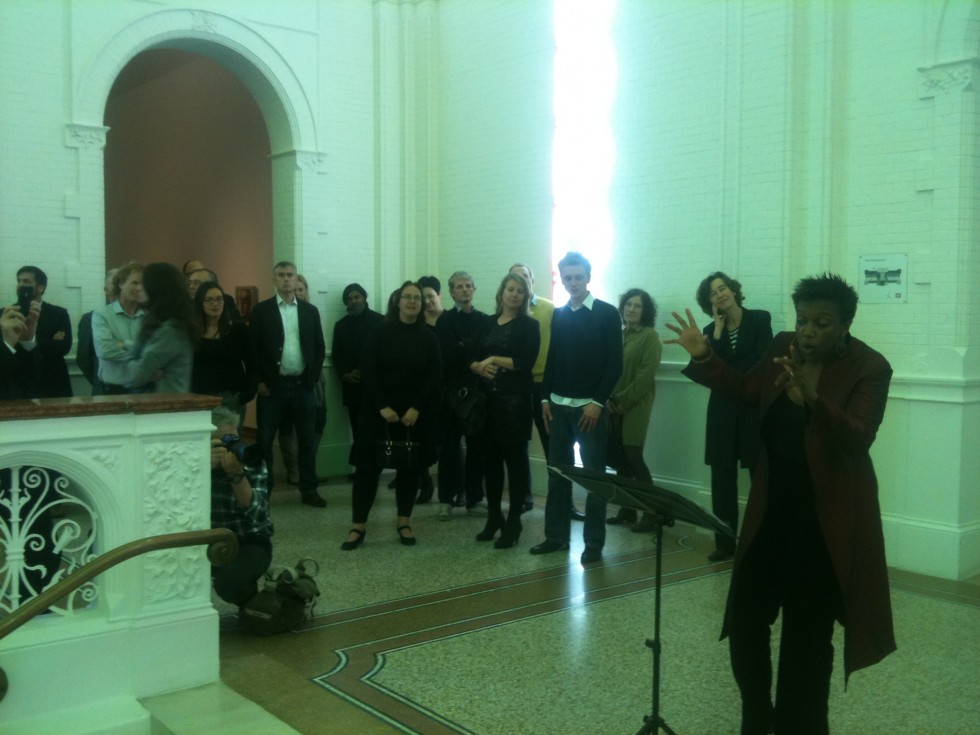 Non-fiction was asked to organise the opening performance of Temporary Stedelijk 2, in the Stedelijk Museum on Wednesday 2 March. We invited American soprano Claron McFadden for a special performance of ‘Aria‘ by American composer and artist John Cage. The piece was written by Cage in 1958, and has a remarkable ‘visual’ score that consists of a “sequence of curved lines each one roughly describing the pitch path requested for the emission of sound. It is a relative pitch: the position of the curve on the sheet does not involve a frequency relation with previous or followings curves but simply points out a “change of state” and a time. Through different colors placed on the curves, the score prescribes to the interpreter a timbre change. The different timbres are not predetermined by Cage on the score but chosen by the performer during the rehearsals.” (Walter Cianciusi)

For the opening performance Claron McFadden used the newly reinstalled Dan Flavin work ‘Untitled (to Piet Mondrian Through His Preferred Colors, Red, Yellow and Blue)’ as a visual score for improvisation according to the logic of Aria, and by doing so poetically played the work and the room it resides in. In the second performance she was joined by Bulgarian composer and musician Dimitar Bodurov, who aided  by microphone and electronics added another layer of improvisation and in his turn simultaneously played Claron, Cage and Flavin. The pieces formed a small virtuous sequence of playful actions that resulted in a gentle opening ceremony of Temporary Stedelijk 2.

‹ Royal Concertgebouw Orchestra AAA rating — Hear it! – a playlist for the Stedelijk Museum ›