We are happy to announce our collaboration with A Perfect Day – Tekenshow, a 2-week exhibition showing artistic (and awkwardly funny) drawings at the Westergasfabriek in Amsterdam. Initiated by graphic designer Olga Scholten and illustrator Paul Faassen, and produced by Corine Haitjema, we will focus on several warm-up events, the fringe programme and overall campaign of this mini-festival. The exhibition will be designed by the architects of bijlbuschmann from Rotterdam. 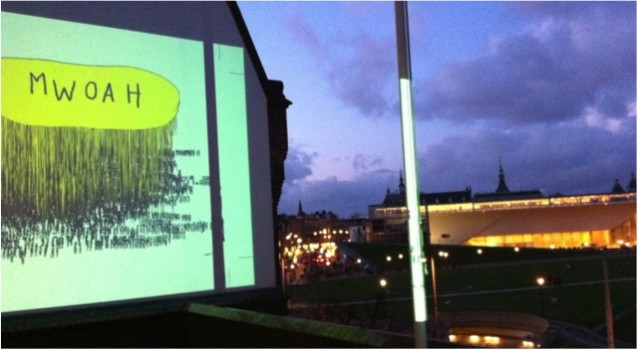 Photo taken from the balcony of the Non-fiction office, overlooking Museumplein, during the warm-up event: the official kick-off for A Perfect Day on December 9, 2011.

From New York to Amsterdam

The show is based on the exhibit at Apexart, New York called Lots of things like this, which took place in may 2008. This show was curated by Dave Eggers (author of a.o. the best-selling memoir A Heartbreaking Work of Staggering Genius) and Jesse Nathan (writer and  editor at McSweeney’s publishing in San Francisco). American publishing house McSweeney’s has published a book called ‘More things like this’, showing works from the exhibition by a.o. Jean-Michel Basquiat, Georges Braque, R. Crumb, Marcel Duchamp, Philip Guston, Raymond Pettibon, Dan Perjovschi, David Shrigley, Shel Silverstein, Nedko Solakov, Art Spiegelman and Saul Steinberg.

“Now more than ever, you see, anywhere in the world, an art form that consists of image and text, resulting in a narrative, above all, funny picture. Originated to works as Sengai, Goya and Magritte. Today you see writers, cartoonists, graffiti artists, poets, songwriters, stage and film makers and artists around the world – in some cases their main task – working with the above elements. It is an accessible, contemporary form of communication, with a quick simple universal language, but as intimate as a sketch on a napkin.”  - Jesse Nathan

Works by Dutch graphic designer Olga Scholten and illustrator Paul Faassen were included in this exhibition and back in Amsterdam the two of them decided to bring the works of their colleagues, past and present, to The Netherlands.

A Perfect Day is the continuation of the exhibition in New York. Drawings with texts hold a central position in the exhibition – drawings that are poetic, disruptive, and, above all, funny. A Perfect Day shows how different artists express themselves by means of unusual drawings about everyday moods, thoughts and observations.

Basically the show will highlight work that includes these three elements:

1. An image
2. Some words (usually referring to the image)
3. A sense of humor

The exhibition will take place at the Westergasfabriek, a former gasworks turned culture park, in Amsterdam. We will work together with other partners at the Park to show movies, make food and organise lectures. And we will invite artists to turn the Park into their own sketchbook. For the final program, please come back later.

A Perfect Day is more than just an exhibition. Films, music, performances, and drawing workshops for all ages bring A Perfect Day to life. The preparations for the show can be tracked online, and Non-fiction is organizing various pop-up events under the name ‘The City as Canvas’. The locations for the pop-up events will be announced on the website. -

Works by some of our favorite artists in the show: Gummbah (left) and David Shrigley (right)