For the last two years we have had the pleasure to work for and with Stadsherstel, an Amsterdam based public-private organization that renovates and redevelops monumental buildings. Now we are taking our collaboration to the next level with an experimental crowdfunding-project that aims to raise financial support and public attention for the school where around 1890 C. Joh. Kieviet wrote one of the the most legendary Dutch children books, Uit het leven van Dik Trom, about the life of the chubby boy Dik Trom.

Dik Trom (Dicky Drum in English) is the main character of the 19th and early 20th century children’s books by the same name. Dik Trom is a naughty boy that always gets into trouble with the best of intentions. “He is a special child, and that’s what he is”, his father used to say after hearing about another one if his adventures. There were several Dik Trom movies, the most recent is the 2010 movie Dik Trom.

The books were written by C. Johan Kieviet (1858 – 1931) who worked as a teacher in a single room school in the tiny village of Etersheim, some 30 kilometers north of Amsterdam. The school lost it’s original function, after which it was converted into a family house before being abandoned several years ago. Stadsherstel managed to acquire the building and will restore it to its old splendor. After the renovation the building will house a children’s books museum. 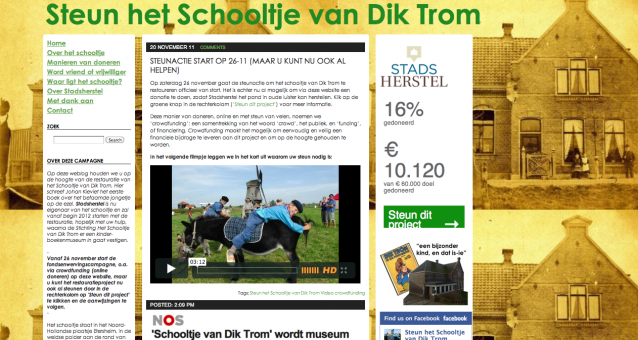 Together with Stadsherstel and the crowdfunding-specialists of WEBclusive, and with help from a.o. Roy Cremers who founded the most successful Dutch crowdfunding-website Voordekunst, we developed a website with an integrated crowdfunding-application that enables people to donate (random or fixed amounts of) money to the restauration project. In return supporters receive a non-financial award, ranging from Dik Trom books and T-shirts to exclusive events.

Eventually, over a period of 3 months, we hope to raise € 50.000 that will cover the costs of the most visible/tangible parts of the renovation, including the original name plate and dormer window. This experiment is the first crowdfunding-project within the domain of heritage preservation.

In addition to the crowdfunding-website, we have developed a PR campaign that runs from 26 November until February 2012. There has been an enormous interest from Dutch media for the project and together with the website, the online community and real-life events we hope to gain momentum and bring Dik Trom back to his parental home..

The location of the building in Google Maps

About crowdfunding
“Crowd funding (sometimes called crowd financing, crowd sourced capital, or street performer protocol) describes the collective cooperation, attention and trust by people who network and pool their money and other resources together, usually via the Internet, to support efforts initiated by other people or organizations. Crowd funding occurs for any variety of purposes, from disaster relief to citizen journalism to artists seeking support from fans, to political campaigns, to funding a startup company or small business or creating free software.” Read more (on Wikipedia)