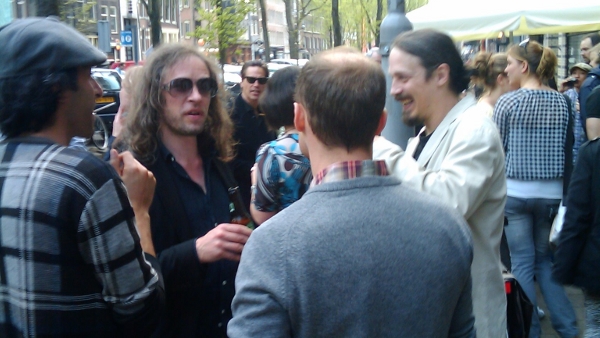 Left to right: Shezad Dawood, Ladywoodsman, Patrick Gibson and a lovely man whose name I forgot

Last Saturday Amsterdam galery Gabriel Rolt opened the exhibition ‘Montana‘ of famed English artist Shezad Dawood. Part of the exhibition was his film ‘Feature’, recently screened at Altermodern: Tate Triennial 2009. For the Dutch premier of the film, Gabriel Rolt teamed up with De Verdieping, where it was privately shown last Saturday night for for guests of the galery. After the film, a Q&A with Dawood followed. The night ended with a raw improvised performance of Duke Garwood and Ladywoodsman, transforming De Verdieping into a underground music venue one would expect in Detroit.

This Wednesday 15 April, we will show ‘Feature’ again. This time it will be public, and free of charge. Door opens at 8.30, and the film starts at 9 PM sharp. We kindly invite you to be part of this. The restaurant will be open, so come join us for dinner at 7.

We look forward to seeing you at De Verdieping on Wednesday.

‹ The making of Trouw, a marathon interview — Contaminous frequencies detected ›