Big up to Trouw! 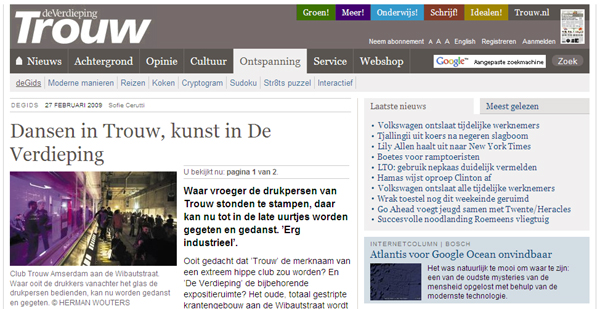 We are currently working on an event programme for Trouw Amsterdam, a club, restaurant and cultural space in Amsterdam. This new venue was named after a well known Dutch daily newspaper Trouw who used to have its office space and printing facilities in the building before moving to a new location in 2007.

The newspaper uses the word ‘Verdieping’ (or ‘deepening’ in English, as in ‘deepening your knowledge’) as its tagline, and we decided to preserve the term to emphasize the depth of the programme and the fact that the event space is situated below street level.

The newspaper Trouw dates back to World War II and is rooted in the Dutch Protestant resistance. It aims to be a source of contemplation and inspiration for everyone. We don’t believe in any particular god or religion, but we do strive to be a source of inspiration and reflection and we support the spirit of resistance, so we are happy to pay homage to Trouw.

In return, the newspaper has given its ‘sign of approval’ this week by running an article about its namesake. The author expresses her amazement for the fact that an ‘extremely hip club’ has adopted their name and ends her story with an endorsement: “go check it out”. We appreciate that, so big up to Trouw!

Read the article in Trouw (in Dutch).