Member of Stad-Forum: discussing the future of Amsterdam

Michiel van Iersel, co-founder of Non-fiction, was asked (and happily agreed) to join the so-called Stad-Forum, which was recently established by the City of Amsterdam as an advisory board, think tank and platform for debate focusing on urban developments and planning issues within the Amsterdam metropolitan area.

The Stad-Forum consists of three key members and a circle of twelve additional members, each with a different background, ranging from entrepreneurs and property developers to scholars, curators and artists. Michiel will focus on such topics as urban regeneration and temporary use of vacant spaces, the role of new and mobile media in the way we perceive and shape our cities and heritage and innovation.

The key members are Karin Laglas (Dean of the Faculty of Architecture at Delft University of Technology), Liesbeth Jansen (Advisor on Redevelopment, Cultural Heritage and Creative Economy) and Wouter Veldhuis (urban designer/architect & partner with MUST).

The aim of Stad-Forum is to identify the most pressing issues and developments that shape the future (appearance) of Amsterdam, facilitate a dialogue between the various stakeholders, and advise the City Council and college of Aldermen on future policy. 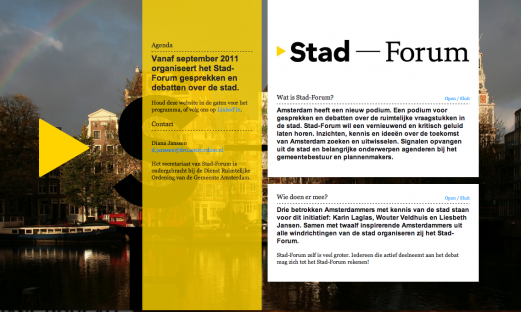 Stad-Forum is linked to The Department of Physical Planning (Dienst Ruimtelijke Ordening, or DRO), one of the City of Amsterdam’s centralized services that focuses on the organization and design of an attractive and spatially coherent city.

From September onwards Stad-Forum will actively address issues of contemporary urban life through public and interdisciplinary programs. Its goal is the exploration of new and innovative ideas, public engagement, and ultimately the creation of progressive solutions for life in Amsterdam.

The first public appearance of Stad-Forum will be at PICNIC Festival 2011.

‹ Capital A: a new yearly visual arts festival in Amsterdam — Collecting the Future: participants in urban forum in Turkish city of Sinop ›