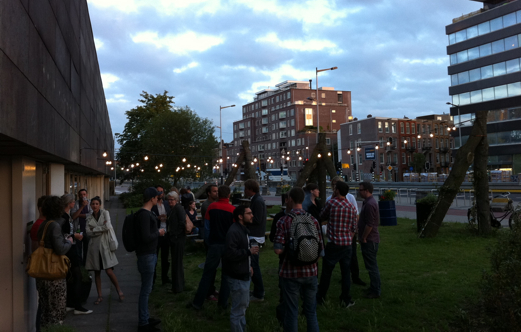 So many things are happening in our world but we always forget to write about them. Here’s a fresh attempt to share with you the things we do.

First, on Wednesday, Michiel – with Tim Verlaan and Mark Minkjan – hosted the third local edition of Failed Architecture, the blog that became an architects’ physical space hang out. This time with distinguished guests Maja Popovic, Paul Groenendijk and Ana Souto. Unfortunately Arnold Reijndorp was ill. Another great mixed crowd of young architects and architecture students gathered in the basement of De Verdieping.

Then, on Thursday, we signed an agreement with the world-renowned contemporary music protagonists the Ives Ensemble, who we have followed and admired for as long as we know about the music of Morton Feldman and John Cage – these American composers have written compositions for this ensemble. We will help them in any way possible with their never-ending search for new contexts for their already existing and yet to be found repertoire. And we will also develop and implement new public instruments for becoming a truly public ensemble in our networked culture. Simply put: we will be one part archaeologists of their artistic history, and one part momentum machine for their sociocultural future.

We cannot emphasize enough how delighted and honoured we are with this new partnership, and we look forward to working with such a landmark of Dutch culture.

Between this, we continued creating new plans for the vast portfolio of city restorers Stadsherstel, for whom we are acting a bit like embedded innovators. Besides Zaanse Schans, where Michiel, Amie and Dea are currently preparing one of the houses to become a new arts residency, we are working helping Stadsherstel engaging with different audiences through adopting new strategies for their projects. One of the examples is the ‘development blog‘ of the Zaanse Schans. Here those involved will share images, quotes and references relevant to the whole process of the little house recently that moved here. We are preparing to set up a crowdfunding platform with Stadsherstel, and we will be imagining new futures for one of the fortresses that is part of the Stelling van Amsterdam. That’s right, a fortress. Should be awesome, don’t you think?

A fortress does come in handy in the current ‘war on culture’ that is taking place in the Netherlands. Maybe we can house the homeless art institutions here after 2013, when the proposed funding cuts will be implemented. But let’s hope someone will find a legal route to stop our Minister of Culture implementing his economically irrational and culturally counterproductive plans.

There are more plans underway, for Teylers Museum, Muziekgebouw aan ‘t IJ and Picnic, but we will tell you more about these in the coming weeks.

For now, drive and shoot straight.