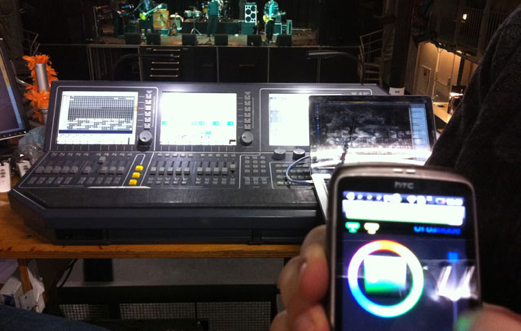 Yesterday I had the privilege to give a brief presentation of Urbanode at the Cognitive Cities Conference in Berlin. To give more background information, here is the full text on Urbanode as written by VURB co-founder Ben Cerveny:

The Urbanode project, a research partnership with Digitale Pioneers, begins the process of creating public system software by wrapping the controls for lighting control systems, such as those found in theaters and nightclubs, in a javascript programming framework.

Javascript is well on its way to being the default choice of lightweight scripting notations for all types of webservices. It has become common practice for any large-scale social networks, streaming media services, and informations systems to present a publicly accessible javascript application programming interface, or API, so that 3rd party developers can call on their functions or read their data in any program. In HTML5, the latest specification for web browser functionality, javascript takes on animation capabilities with the concept of a canvas that the application can draw to, as well as the more traditional mechanisms for creating dynamic applications by manipulating the Document Object Model. In Urbanode, we start to apply these same document-related scripting paradigms to space itself. How do you write applications in javascript that treat space as a canvas? What does the Spatial Object Model, or SOM, look like?

In thinking about designing for programmable spaces, it might be useful to consider a few user scenarios. In this first pass at understanding the design opportunities, lets look at use cases in 3 separate categories of interaction:

Direct manipulation is perhaps the most straightforward example. A user might come into a danceclub or other venue and open their Urbanode browser on their mobile device. The Urbanode browser would query the local server and return a list of applications available in the space. In this scenario, let’s suppose there is only one called “Light Commander”. The user selects this application and the browser retrieves the appropriate web interface, which initially presents a schematic view of the lighting in the space, with each light color-coded to indicate whether it is under the control of the venue operator, another user, or available to be controlled. The user taps on an ‘open’ spotlight and is presented with a control interface with a color wheel, directional controls, sliders for focus and brightness, and light pattern icons. There might also be a timer counting down a short interval until the light reverts to ‘open’ and must be re-acquired.

Urbanode running from an Android Phone from VURB on Vimeo.

Environmental control is oriented around locations within the space, rather than specific pieces of controllable hardware. In the scenario we will consider here, let’s imagine a restaurant in which each table has network-accessible properties like “mood” or “energy level”. When the diners first sit, they can open the Urbanode browser and scan a a symbol on the table with their phone’s camera to log-in to that space. The application presented is a simple scrolling list of mood choices like “romantic”, “party”, and “family”. Each choice dynamically effects the table-specific lighting brightness, color, and variation over time. These mood choices might also reconfigure the music stream or other audio, and also be displayed to the staff on a separate monitor so they might choose to service tables differently depending on selected mood.

Ambient information applications serve as ways to map data from network sources [webservices data, mobile device polling, or sensor data] to attributes of environmental mediation like lighting or audio. Let’s suppose the spotlighting on an obelisk in a public square is programmable using Urbanode. A citizen with permission to control those lights could build an application that displayed realtime sporting information using abstract color patterns and sequences. As citizens entered the square, they could consult their mobile devices, open the Urbanode browser, choose the “SportsMonument” application, and learn what the color mappings represented [say a soccer match in which the team colors of the team in the lead would be displayed, brighter depending on how big the lead is].

These examples are by no means an exhaustive catalogue of possible uses of the Urbanode infrastructure. On the contrary, we hope this initial framework inspires a whole range of uses, many surprising to us. We plan to continue adding to the catalog of environmental services Urbanode can control, starting a broader range of lighting equipment and eventually audio hardware and projectors. This kickoff phase in collaboration with Digitale Pioneers marks a strong start to an ongoing investigation of how we will build and live in the public spaces of the future.

The VURB Foundation is looking for new partners and collaborators to start working on new prototypes and services. For more information, please send an e-mail to juha@vurb.eu.