Time Out interview on Amsterdam’s UNESCO-listing

Non-fiction’s co-founder Michiel van Iersel is featured in this month’s edition of Time Out Amsterdam, talking about Amsterdam’s enlistment on UNESCO‘s World Heritage List and the possible pros and cons. In 2007 he already wrote on this topic, concluding that ‘people can’t live in museum’s’. This paper can be downloaded here.

‘People Can’t Live in Museums’ wrote Van Iersel in 2007, in a paper opposing the quaintification of Amsterdam’s historic centre,. Now that the Canal District has been listed as a UNESCO World Heritage site, Alice Ramsay checked in with him again. 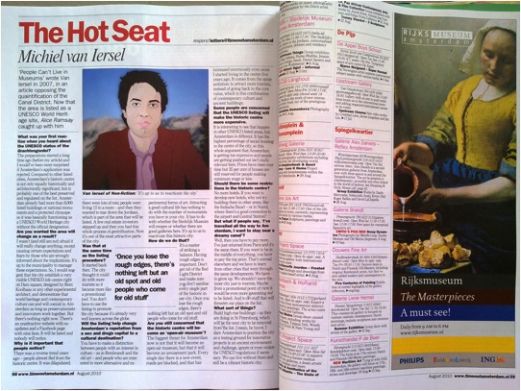 What was your first reaction when you heard about the UNESCO status of the Grachtengordel?
The preparations started a long time ago (before my article) and I would’ve been more surprised if Amsterdam’s application was rejected. Compared to other listed cities, Amsterdam’s historic centre is not only equally historically and architecturally significant, but is probably one of the best preserved and regulated on the list. Amsterdam already had more than 8,000 listed buildings or national monuments and a protected cityscape before they applied so it was basically functioning as a UNESCO World Heritage city without the official designation.

There have been various reactions to the listing.
I wasn’t (and still am not) afraid that the official designation will really change anything, except causing certain expectations and fears by those who are wrongly informed about the implications. It’s up to the municipality to manage these expectations and inform both supporters and opponents. So, I would suggest that the city establish a very visible UNESCO info centre right on Dam square, designed by Rem Koolhaas or any other experimental architect, and demonstrates that world heritage and contemporary culture can and will coexist in Amsterdam as long as preservationists and innovators work together. But there’s nothing right now. There’s an unattractive website with no updates and a Facebook page with nine fans. It will be listed and nobody will notice.

Why is it important that people notice?
There was a reverse trend years ago – people almost fled from the historic centre. It was dilapidated; there were lots of rats; people were living 15 to a room – and then they wanted to tear down the Jordaan, which is part of the area that will be listed. A few real estate investors stepped up and then you had this whole process of gentrification. Now it’s one of the most attractive parts of the city.

Was that at the same time as the listing procedure?
It started back then. The city thought it could do with more tourists so it became more like a promotional tool. You don’t have to use the listing to promote the city because it’s already very well known across the globe.

Will the listing help change Amsterdam’s reputation as a sex and drugs capital to a cultural destination?
You have to make a distinction between people with an interest in culture – as in Rembrandt and the old art – and people who are interested in more alternative and experimental forms of art. Attracting a good cultural life has nothing to do with the number of monuments you have in your city. It has to do with whether the Stedelijk Museum will reopen, for example, or whether there are good galleries here. It’s up to us to reactivate this historic city.

How do we do that?
It’s a matter of striking a balance. Having rough edges is important. Don’t get rid of the Red Light District and make sure that some of the DNA of that place doesn’t disappear; make sure you don’t sanitise every single part of the historic inner city. Once you lose the rough edges there’s nothing left but an old spot and old people who come for old stuff.

Are you still concerned that the historic centre will become an ‘open-air museum’?
The biggest threat for Amsterdam now is not that it will become an open-air museum, but that it will become an amusement park. Every single day there is a new event, roads are blocked, and that has increased enormously even since I started living in the centre five years ago. It comes from the same ambition: to attract more tourists, instead of going back to the core value, the unique selling point of the city, which is atmosphere and architecture and this combination of contemporary culture and ancient buildings.

Some people are concerned that the UNESCO listing will make the historic centre more expensive. Does that worry you?
It is interesting to see that happen in other UNESCO-listed areas in Europe and elsewhere, but Amsterdam is different. It has the highest percentage of social housing in the centre of the city, so this whole argument that Amsterdam is getting too expensive and people are getting pushed out isn’t really relevant here. Prices have risen over time but 35 per cent of houses are still reserved for people making minimum wage or less.

Should there be some restrictions in the historic city centre?
No more hotels. If you want to develop new hotels, why not try building them in other areas, like the Indische Buurt – or in Noord, where there’s a good connection to the airport and Central Station?

But what if people say, ‘I’ve travelled all the way to Amsterdam, I want to stay near a dreamy canal’?
Well, then you have to pay more. I’ve just returned from Paris and it’s the same there. If you want to be in the middle of everything, you have to pay the top price. That’s normal elsewhere and we have to learn from other cities that went through the same developments. We have to grow up. We shouldn’t leave the inner city just to tourists. Maybe from a promotional point of view it would be even more interesting not to be listed. And to do stuff that will threaten our place on the list.

What sort of things?
Build high-rise buildings – as they are doing in St Petersburg, which will be the next city to be removed from the list. I mean, be brave. I dare Amsterdam to position the city as a testing ground for innovative projects in an ancient environment and challenge, ignore or even violate the UNESCO regulations if necessary. We can live without them and still be a vibrant historic city.