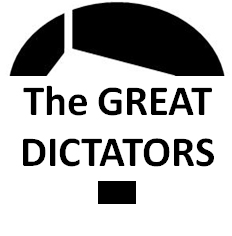 The Great Dictators is a new monthly film night at De Verdieping, the cultural project space of TrouwAmsterdam, focussing on ‘the vanity of evil’. Each night centers around one absolute ruler, both past and present, and shows how tyrants and populist leaders are (re)presented in (documentary) films. Non-fiction’s Michiel van Iersel is curating this series.

The Great Dictator is a comedy film directed by and starring Charlie Chaplin. It was Chaplin’s first true talking picture, and more importantly was the only major film of its period to bitterly satirize Nazism and Adolf Hitler. Chaplin began filming in September 1939, one week after the beginning of World War II when the United States were still at peace with Nazi Germany. He finished filming almost six months later. In his autobiography, Chaplin stated that he would not have been able to make such jokes about the Nazi regime had the extent of their horrors been known. After 1945 it took over twenty years before any other films dared to satirize the era.

In this movie, Chaplin plays Adenoid Hynkel, the great and autocratic dictator of Tomania. He was satirizing both Hitler and Nazi Germany. Chaplin also plays a second character, a Jewish barber, who is an Adenoid Hynkel look-alike. Hynkel’s rival is Napaloni (a mixture of Mussolini and Napoleon), dictator of Bacteria (Italy).

Almost every scene in The Great Dictator is perfect: the iconic globe dance, Hynkle’s poorly-translated address to the Tomanian people, the musical shaving scene, an upside-down airplane, all capped by Chaplin’s heartrending final plea for peace.

The film was sent to Hitler, and an eyewitness confirmed he saw it twice. Chaplin, after being told Hitler saw the movie, replied: “I’d give anything to know what he thought of it. Several similarities between Hitler and Chaplin have been noted and may have been a pivotal factor in Chaplin’s decision to make The Great Dictator. Chaplin and Hitler had superficially similar looks, most famously their toothbrush moustaches. Furthermore, the two men were born only four days apart in 1889.

‹ The Medium is the Metropolis — With online game, museum goes viral ›