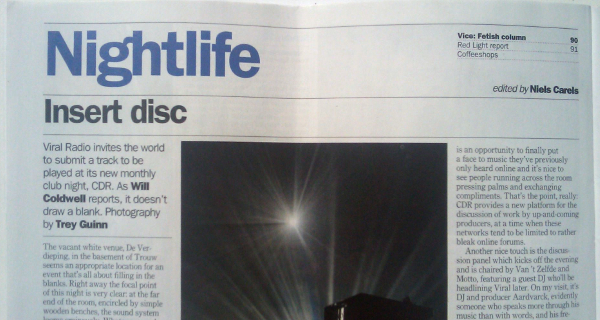 Create, bounce, and burn. This is the vernacular of a new generation of beat makers around the world. They use software with swanky names as Logic, Reason or Live to contribute to the ever growing architecture of rhythmculture. Forming scenes in Glasgow, Los Angeles, London, Amsterdam, and in many other outskirts, they are the dark metabolism of nightlife and music culture of today. With social networks reaching semantic cruising altitudes, the exchange rate of music is getting more spectacular by the day. Virally communicating and freely sharing through Soundcloud, Facebook, Twitter, iChat and (even) MySpace, a faceless herd of avatars and monikers roam the digital present in search of a beat.

With CDR, Viral Radio and Beat Dimensions have joined London’s Burntprogress in creating a common ground for these producers to present their music. CDR, which takes place in De Verdieping in the ‘Berlinesque’ Wibaustraat in Amsterdam, acts as a hub and social hive for musicians, music professionals and the general public to exchange new beats. The process is basic: people bring their music on a CDR, hand it in to the DJs of the night, who will play them over the weighty club soundsystem. Each artist name and track title will be projected on the wall. The night will be opened by interviews with the visiting artists from the following Viral Radio night upstairs at TrouwAmsterdam. Entrance for musicians with a CDR is free; 5 euros is charged for other visitors. As a bonus everyone can stay for Viral Radio later on.

The third edition of CDR is about to start tonight at 8.30 PM at De Verdieping. We look forward to seeing you there.