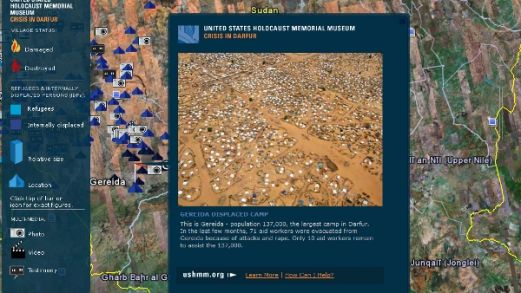 Crisis in Darfur, a mapping initiative by the United States Holocaust Memorial Museum

According to Wikipedia, the term ‘ubiquitous computing’ dates from 1988 and was first used by the American, Mark Weisner, when he was chief technologist at Xerox’s legendary Palo Alto Research Center. Ubiquitous computing refers to the omnipresence of the computer, a phenomenon now moved well beyond the desktop and fully incorporated into our portable functional objects. The best-known example is probably the iPhone, which has revolutionized the cellular telephone, altering it into a convenient little computer capable of ‘doing everything’. We can also think of the onboard automobile computers that keep track of tire pressure, fuel levels and the routes being driven. Computers that tell us what we should purchase have, of course, been a reality for some time (such as the Tamagotchi electronic pets, dating from 1996). We are, however, not so far advanced that we use our iPhones to communicate with our refrigerators, let alone our stomachs (something that those who call themselves transhumanists are all too happy to predict).

What we increasingly understand, however, is how we can make use of this technological development to make our collective heritage more visible and accessible. A few years ago, in the United States, the Holocaust Memorial Museum (USHMM) in Washington began employing Google Earth and Google Maps to better inform their visitors of the history of the Holocaust and chart current-day threats of genocide, such as in Darfur, in Sudan. On the museum’s website, you can look through the lens of the museum as you travel Google Earth for an overview of international crisis spots. This project moreover came about in collaboration with the United Nations, Amnesty International and the international photography associations, making it more topical and up to date.

Another example of an institution using the Internet to reach beyond its walls is the Prado, in Madrid. The Prado also uses Google Earth as an instrument, but in contrast to the Holocaust Museum, it does not use the museum to zoom in on the world, but uses the world to zoom in on the museum. Google Earth is making it possible to look at works by Velazquez, Rubens and Rembrandt at a resolution of 4 billion pixels, or 14,000 MB (!), and to zoom in on details of masterpieces in ways that would never be possible in the museum itself.

In Amsterdam, a group of software developers have spent several months working with Narb, an iPhone application that allows museum visitors to take photographs and provide commentaries to the works they are viewing. This can then be shared via different social networks. It is relatively simple to create a personal route for yourself, or for someone else, and to share and compare it with friends and strangers. The advantages for the museums are manifold: works of art move beyond the walls of the institution, in more personal contexts, and are coupled with other works from different museums (not just locally or nationally, but soon, also internationally). A less evident, but socially and economically very interesting and pertinent advantage of this is that Narb allows museum visitors to express their own opinions about the works of art. The ‘app’ was introduced at the recent Rotterdam Museum Night and is now being further developed for a number of museums and art fairs. Its developers hope to be able to activate museums and involve them in the project, further enriching the database and making it more attractive for visitors and institutions alike.

These are only three examples of an expanding domain of new developments in the land of the museums. Each year, academics, developers and marketing experts meet at the Museums and the Web symposium in North America, to discuss the latest state of affairs, compare products and most of all, in the breaks between seminars and lectures, daydream about endless ‘museo-spheres’ with no walls, no opening hours and no entry fees.

This ubiquitous museum is coming ever closer. It will make it possible for museums, archival institutes and monuments to establish themselves as important links within the interwoven fabric of the Internet. A museum can be everywhere at all times, on your iPhone at the bus stop, in your hotel room in a foreign city, in that extra hour at home, sitting on your balcony. This is a world in which you can immerse yourself, an historical dimension that you can call on at will, a search engine with all the original documents that you could possibly ask for. It would be wonderful. For those who are horrified by the idea, who envision empty auditoriums, have no fear. This scenario is simply an extension of existing practice and will be found outside, around the museum, not in place of the museum. It offers alternative access to the ultimate encounter with the actual objects. It is a bit like the navigation system that assists you when you are driving a car. It could hardly be a bad move on the part of Amsterdam’s Stedelijk Museum if they were to appoint the former CEO of Tom Tom as their new Chairman of the Board of Trustees.

This article was published in Metropolis M of June/July 2009.